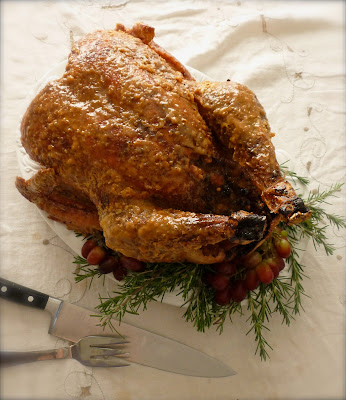 This recipe was a special creation for The Asheville Citizen Times which appeared in print last week alongside my article on giving thanks for locally raised turkeys. For those of you still deciding on how to roast your Thanksgiving bird, consider the following. The maple bourbon glaze candied the turkey's skin, creating a crunchy, sweet crust, outside perfectly juicy meat. A tart bite from cherries with salty local bacon made for a perfect stuffing to dress it with. This recipe may become a new tradition at our place. Thank you to The Asheville Citizen Times and to East Fork Farm for inspiring this year's holiday table. And a heartfelt thanks to you for reading! 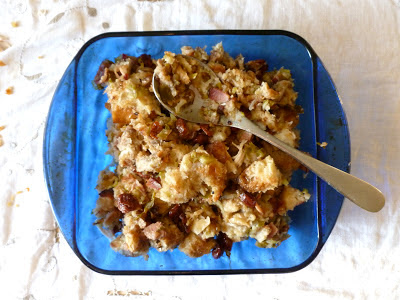 Preheat oven to 350.
Line a baking sheet with parchment. Arrange bacon on baking sheet and bake until crispy, about 10-15 minutes. Transfer to paper towels and set aside.
Place cherries in a bowl and cover with boiling water for 15 minutes. Drain and set aside.
Remove crust from bottom and ends of bread loaf and discard. Cut bread into 1 inch cubes and place in a large mixing bowl. Add garlic and olive oil. Toss.
Spread out on a rimmed baking sheet and sprinkle with sea salt and black pepper. Bake until slightly crunchy, stirring often, about 20 minutes.
Remove from oven and return to the same mixing bowl.
Place a cast iron skillet over medium heat. Add butter. Saute onion, celery and green pepper until soft, about 8 minutes. Add to bread mixture. Stir in chopped bacon, cherries, broth, parsley and pecans.
Set aside for stuffing the turkey. 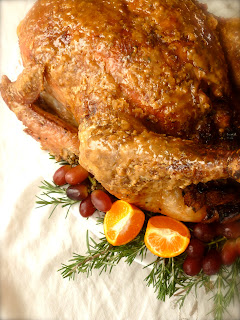 Preheat oven to 425.
Place turkey in a large roasting pan fitted with a rack. Stuff chest cavity with local bacon and dried cherry stuffing. Tie drumsticks together with kitchen twine.
Pat turkey dry with paper towels. Smear with butter and liberally season with sea salt and black pepper. Add broth to bottom of roasting pan.
Place turkey on bottom rack of oven and roast for 30 minutes before reducing heat to 350. Roast for 45 minutes. Baste with pan liquid and loosely cover turkey with foil. Baste after 35 minutes, adding more liquid to pan if needed.
Bring maple syrup and bourbon to a gentle boil in a small saucepan over medium heat. Reduce heat and simmer until liquid is reduced to about 1 cup. Set aside.
Begin brushing turkey with glaze every 30 minutes within the last hour and a half of roasting. You should brush with glaze at least 3 times before turkey is done. Reheat glaze as needed if it becomes too thick.
Once a meat thermometer inserted into the thickest part of the thigh reads 165 degrees, remove from oven. Stuffing must also reach 165 degrees. Brush turkey one final time with glaze, reserving at least 1 tablespoon for gravy.
Allow turkey to rest for at least 10 minutes before transferring to a platter. Let it rest for an additional 35 minutes before carving.

Maple Bourbon Gravy:
Transfer turkey drippings to a saucepan, adding 2 1/2 cups stock (made from giblets) and about 1 tablespoon remaining glaze. Bring to a simmer. Add 1/4 cup flour to 1/2 cup cool water in a small mixing bowl and whisk with a fork until completely dissolved. Slowly whisk flour mixture into drippings and simmer until thickened. Pour through a strainer into a serving vessel and serve immediately.

Gather, give thanks, and enjoy!